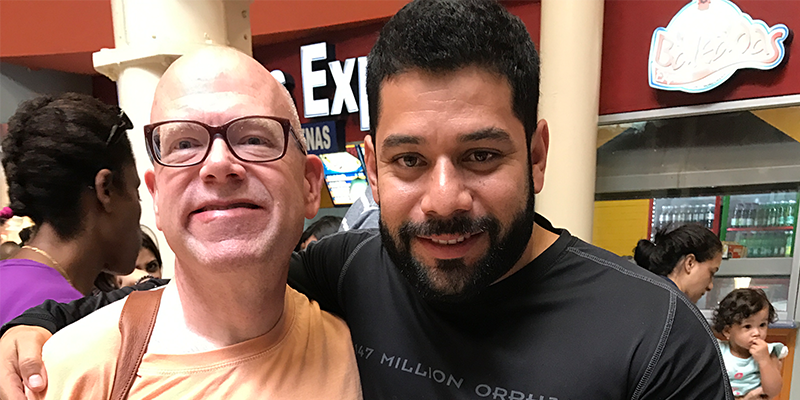 Through His Eyes: My First Trip Outside the United States

In mid-December, I was to go out of the country for my first trip outside the Continental U. S. aside from a brief jaunt to Toronto during college. While I was of course very excited it was also a bit overwhelming. My trip to Honduras would provide me with an opportunity to meet Raul, one of Soles4Souls primary micro-enterprise partners on the ground as well as some of our micro enterprise entrepreneurs.
My recollection of landing in San Pedro Sula is that it felt like we were landing in a jungle. We were quickly met by our guides and Raul who appeared well prepared to defend us if necessary. I felt safe and secure in their hands.

Driving through the sugar cane and plantain plantations in the foothills of majestic mountains, I was overwhelmed by the beauty. What a wonderful “first” venture outside the U.S.
On our first day, we visited a small rustic village called Los Olivos. In spite of the fact that this village was not distantly removed from the hubbub of San Pedro Sula and its busy motor bike packed roadways, it was like entering another era. Roadways quickly turned to muddy and deeply-trenched stretches of grassless earth. As we approached the entrance to the village, roosters and small children greeted us and guided us in. Our approach was delightfully complicated by villagers coming up to the van to welcome us to their home.
In spite of great despair and a lack of electricity, the inhabitants of this isolated spot of humanity greeted us with pride and passion for their progress. You see it had not been that long since they had obtained running water and indoor plumbing for their homes. As Raul explained what the village had been through and what they had achieved, I wept! There was simply no way to prevent it AND that was OK. What was beautiful about it was the sheer resiliency of the human spirit that is so evident when you meet and talk with the villagers of Los Olivos!
Meeting the micro-enterprise entrepreneurs that live in the village was so rewarding. Knowing that because of the work of Soles4Souls these women are able to go into the market and sell shoes generating an income for their families and the village as a whole made my entire life worthwhile. We are all such very small specks on this planet that we share so when we glimpse a few seconds of our impact on mankind we should soak it in! And, soaked it in I did!!!