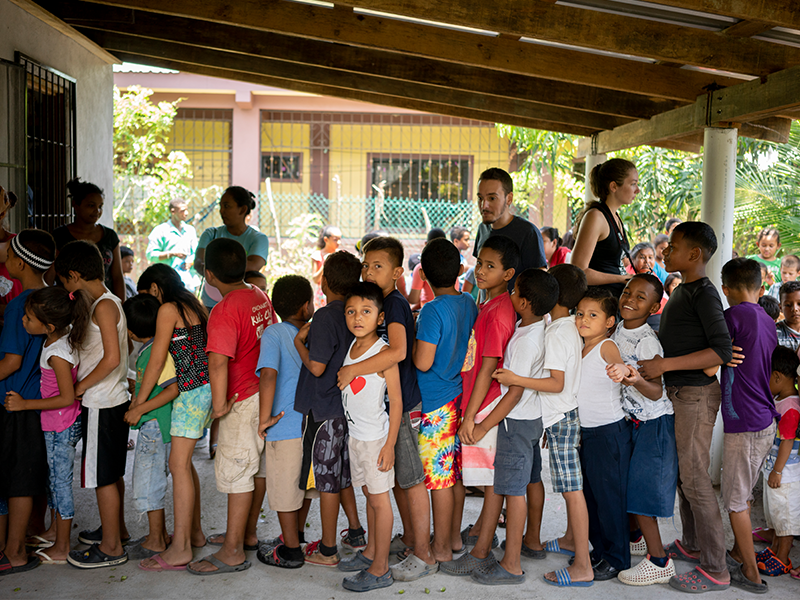 On a Monday afternoon in the humid forests outside of Tela, Honduras, a group of 15 Soles4Souls travellers caravan down rough, dirt paths with bags of shoes strapped to the top of vans. Upon arriving to the first distribution of the week, the group learns the only way to the remote village of La Vente is a ten minute hike up a mountain, as it’s unreachable by car. Soon enough, a dozen excited children sprint down the paths, dust flying behind them, insisting to help carry the bags to the top.

The travellers are all part of the group Teens Connect from Napa, California– a nonprofit focused on engaging and empowering teens through collaborative programs. This is Teens Connect’s seventh trip and partnership with Soles4Souls.

As the teens finish their hike to the village, they are immediately overwhelmed by nearly 75 children anxiously waiting to line up and receive their new pairs of shoes. The group learns that 28 children attend the school, but there are 130 families living spread out through the area.

Jorge Alberto Mocada, the professor at the school, says there are few resources for the children in the area. Families have to travel at least an hour if they need medical attention, or any food they can’t grow themselves. As Mocada talks about the school, a mother approaches holding her son Ramón, 8.

“I have eight children. Getting these shoes means the world to me, because it wouldn’t be possible for us otherwise,” she says. She talks about Ramón, who has a learning disability and has had severe vision problems from a young age. “He’s always getting dust in his eyes, and he can’t see well,” she says. Mocada chimes in, “But he’s always happy. And he works very hard.”

As the children begin lining up to have their feet fitted and washed, a mother named Xiamara holds back tears as she watches her 4 children, ages 13,10, 4 and 2, smile after receiving their pair.  “This means happiness. It means something good,” she says.

Xiamara and her children live around the other side of the mountain from La Vente, a 2 hour walk one-way. They walked over when they heard about the shoe distribution, but the kids do the walk every day to come to the school– all without water.

Seven people live in Xiamara’s home, which is constructed of mud and rocks. The only water they have in their village comes from a small spring. “It’s hard when the kids get sick,” she says. She recalls one specific day her son had an accident, and was cut down to the veins in his arms. It took them 2 hours to get to the road where they could call a taxi, and an hour drive from there to the nearest hospital, she says.

Xiamara’s husband is the only person who works in the family. “My husband makes $35 a month,” she says. When asked what her biggest struggle is, Xiamara takes in a deep breath. “The hardest thing is I can’t find work, but I also have to take care of my children. But no matter what, I just have to be strong,” she says.

As she stands there in front of dozens of children being fitted for new shoes, she feels her youngest daughter tugging at her pants, eyes wide and smiling ear to ear. “She was so unhappy when we got here, and now look at her,” Xiamara says.

As the distribution comes to an end, red dust floats in the air from kicking soccer balls around with the teens, young girls get their nails painted, and parents thank the travellers for all of their help. And as everyone says goodbye with taking a group photo, Xiamara begins to gather her children for the long walk home.