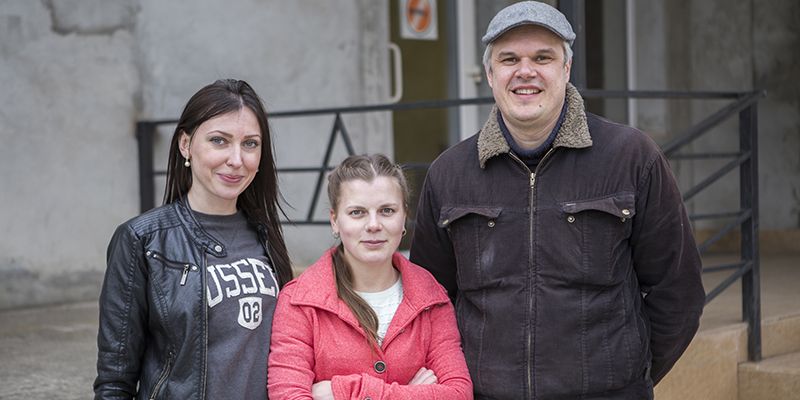 I haven’t told you the whole story about Moldova…

From the blog of our president and CEO, Buddy Teaster

If you’ve been around Soles4Souls very much, you’ve probably heard the stories about our work and our partner in Moldova. Along with one of our board members, our COO and creative director, I just returned from a trip to Moldova. And I have to confess, that I haven’t told the whole story. Sort of.

Our partner, Help the Children, works in this place called Transnistria (or Trans-Dniester) that, to use a Wired magazine headline, gave us the chance to: Meet the People of a Soviet Country That Doesn’t Exist. We flew in Chisinau, the capital of Moldova and it looked like a modest, modern country still climbing out of the USSR’s shadow for more than 25 years. 45 minutes northeast, however, was the first signal that things were about to change:

And because no other country recognizes Transnistria, there is an entire generation of people born after 1992 who only have a Transnistrian passport. And that means they could be literally trapped in this wedge of land between Moldova and Ukraine for the rest of their lives. They can’t even travel into Moldova proper because that internal border is real, and 1000 people died in a civil war over it.

So we don’t work in Moldova. We work in Transnistria which is a hard a place to get things done. There are no mortgages (you have to pay for your house in all cash), no credit and mind-boggling amounts of red tape. And yet Mark Fashevsky, the founder of Help The Children, has built an amazing social enterprise there that now includes 25 thrift stores that sell shoes, clothes and nearly every kind of household goods (except food). He employs more than 150 people in all parts of the operation and the profits fund a wide range of programs focused on orphans and getting kids in foster care. There are some deeply moving stories that we were able to hear during this trip and we’ll be sharing them in the months ahead.

Our work in Transnistria provides new and used shoes and clothing to keep Help the Children going. The profits generated from the thrift stores that sell product donated by our volunteers and retail partners, fund their operations. The donations also provide affordable shoes and clothing for the region and create jobs for mostly women, many who are transitioning out of the orphanage system.

The experience of our last night dinner, with Vale and Kosta and their four current foster care daughters, summed it all up for me. In a small town about 30 min from Tiraspol, there’s clearly very little opportunity. The vibe, including seeing a few animals used for pulling wagons and plowing fields, was depressing. When we turned into the small home, I was prepared for a long, tough evening. Wow, was I wrong.

This family (who has already raised five grown biological children and four adult foster care kids) just radiated love. From the first moment, they wrapped us in their arms and their home. Vale (short for Valentina) was a force of nature and Kosta the strong silent type who built their house more than 40 years ago and among his many agricultural activities raises more than a million bees in their back yard. And yes the honey was amazing!

Most importantly, having seen the state-run orphanages that morning, functional but very bleak, the work that HTC has done to get these girls into a real family is life changing. HTC introduced the concept of foster care to Transnistria. It had never been done before. As of this writing, more than 70 children from ages 8-18 are in loving families. Between the great jobs in the thrift store business and at HTC, the emotional and life skill training the foster care kids receive, and the loving support of a family, I’m as proud as I have ever been of our role in helping HTC.

Is there any more human value than wanting to be recognized? So I’m going to start saying we work in Transnistria rather than Moldova. It might be harder to explain but it also gives me a chance to talk about impact each of us can have in donating shoes, clothes and cash in a place that doesn’t really exist. But it’s real, my friends, realer than I would have ever imagined.