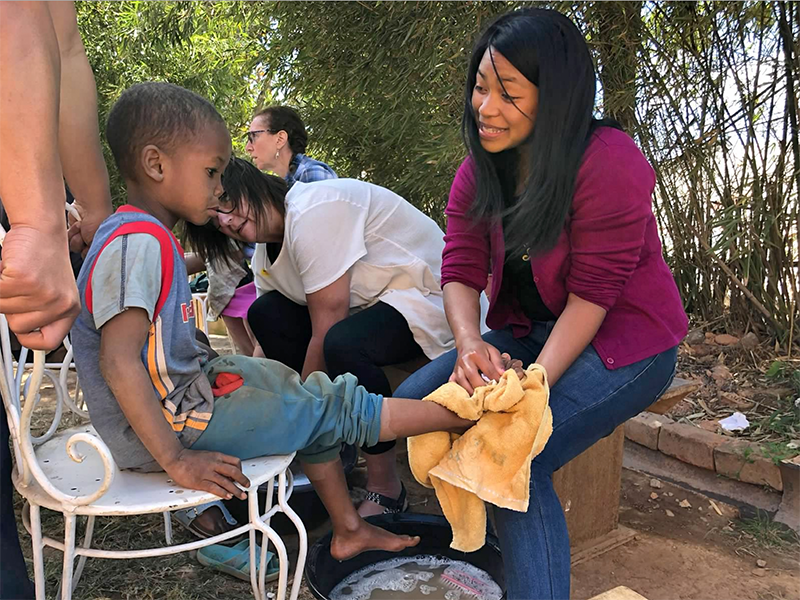 Her Smile was all the Thanks we Needed

Antananarivo. A complicated name for an even more complicated city. Here, in the heart of the island-nation of Madagascar, a tapestry of paradoxes unfolds. And it’s here where seven-year-old Germaine calls home.

Germaine represents the hardships of growing up in extreme poverty. She’s beautiful—her features a blend of a diverse African heritage with Arab, Chinese, Indian and European influences—even beneath the shadows of struggle. She lives in a city divided into pockets defining the fate of its people: the safe ones for the wealthy few, the stunning French colonials, the rest for the nearly 80% of the population living on less than $1.90 per day. Her pocket teeters dangerously on slopes of the island’s famous red clay-like soil, unprotected from the threats of the annual cyclone season and so much more. And she walks amidst it all barefoot. Without shoes, Germaine is vulnerable to cuts, fungi, parasite-contaminated soil and insect bites that can lead to infection, disease, amputation and death. Without shoes, she has no hope for a better life.

Our team met Germaine during a late summer shoe distribution, one of many we take throughout the year. Having worked in 127 countries—including all 50 U.S. states—we know the gift of shoes gives people new dignity, courage and hope. And it’s all possible thanks to the financial support of individuals just like you who help us get shoes to where they’re most needed. Over 30 million pairs since 2006. For every dollar you give, we can provide one more pair of new shoes to a child in need.

Yet their meeting was unplanned. Our partner had arranged for 150 local children in need of the gift of shoes to gather at a city church. The quaint structure stood as an oasis of calm amidst the chaos of the urban slum, though the gate surrounding it was quick to remind our volunteers of the perils at hand. But Germaine was not part of the group. At least not until after a chance encounter with our team leader.

We typically wash children’s feet before fitting them with a new pair of shoes and the nearest source of water at this church was down a nearby alley. Our team leader left the safety of the gate and waited her turn to fill a few plastic buckets from the public tap. Once filled, she made her way back unaware of a second shadow. It wasn’t until she put the buckets down that she realized someone had been following her all along. There was Germaine, standing tall, eyes laid intently on her, smile beaming. A girl who wasn’t supposed to be there, but a girl no less in need. A girl whose childhood curiosity and spirit led her to our team. And to a brand new pair of shoes that will keep her safe.

Who is she? Does someone know her? Who does this girl belong to? All questions that remained unanswered. All questions that wouldn’t matter after our team invited Germaine to stay. Soon she was just another child waiting in line to be sized, washed and fitted. And serendipity would once again take over as her turn would lead her right back to our team leader. They sat face to face, two smiles beaming now. Germaine’s feet reflected wear beyond her years. They were rough, cracked and already showing signs of the pain to come—all things her new pair of shoes will correct. And as Germaine received her gift, no words were necessary to recognize her gratitude for being included. We’re not sure what just happened, but we’re sure glad it did!

Thanks to the donations of individuals just like you, Germaine and nearly 1,000 other children in Madagascar are now safe from injury and disease. But countless others remain vulnerable and in need of your help.

As we enter the holiday season, will you include children like Germaine in your giving plans? They may never be able to thank you personally, but they—and you—will be glad you did. For every dollar you give, we can provide one more pair of new shoes to a child in need all over the world, including right here in the United States. Your gift of shoes can keep them safe, healthy and in school, as shoes are often a requirement for school attendance. $1=1 PAIR. Imagine the difference you can make today.