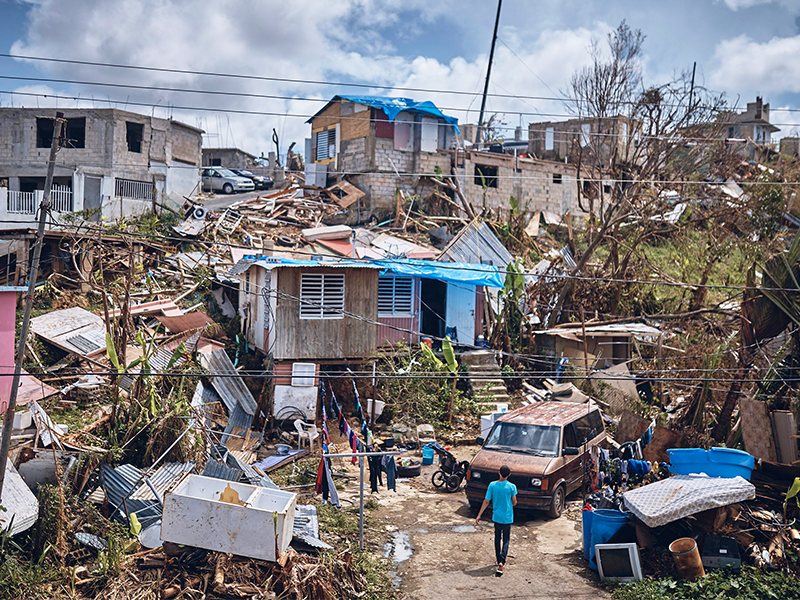 It’s More Than a Pair of Shoes

Puerto Rico is a complicated place. Of course, there’s its relationship with the United States. A territory for more than 100 years, it’s undoubtedly a part of the country and its people citizens like any other. But it’s also not a state, which stirs up certain unique issues. The fact that it’s an island disconnected from the mainland adds yet another layer of gray.

Then there’s its economic landscape. Puerto Rico is a tourism hub in the Caribbean, and there are plenty of swanky hotels and sightseeing tours to prove it. But beyond the glitz of its beaches, there’s also widespread poverty at a rate closing in on 50% and an economy plagued by serious debt and recession.

So it’s not a surprise that Puerto Rico’s post-hurricane experience has been equally complicated. Hurricane Maria hit the island hard this past fall. Really hard. Still recovering from Irma, the Category 4 storm made a direct strike and left havoc in its wake.

After more than 30 hours, the howling winds and torrential rains subsided. But what remained was widespread destruction paralleled by few storms in American history. Dozens dead. Damages in the billions. Total crippling of an aging power grid. A huge blow to an already hurting economy. And 3.4 million residents plunged into a humanitarian crisis.

It’s been more than eight months now and Puerto Rico’s still in the news, and the reasons have been unsurprisingly complicated. Controversies abound on the level and speed of government aid, the focus areas of that aid and what’ll happen next. But one thing is clear. Its people still need our help. And we have responded.

Soles4Souls took part at a shoe distribution in Puerto Rico after Hurricane Maria with the help of the amazing team from Foot Locker. Founded as a disaster relief organization, we understand the power of new shoes in keeping people safe as they begin the long and difficult process of rebuilding their lives. Four trips and almost 3,000 pairs of shoes after, we’re committed to continue providing relief to those left behind in the most impacted areas.

On every trip, we see reminders of Maria everywhere. FEMA tarps, diesel fumes from power generators, creeping mold, “¿PERO CÚANDO?” (BUT WHEN?) signs expressing frustration with the lack of consistent power, the trauma of survival.

But that’s not all. We also see reminders of the resiliency of the human spirit. Laughter, hope, gratitude. And that’s more powerful than the strongest storm surge. “The opportunity to provide shoes to kids… it’s a lot more than a pair of shoes, and that’s something I want people to understand. That pair of shoes gives them hope,” reflects Enrique “Kiko” Mendoza from the Carlos Beltran Foundation, our partner on the ground.

Being able to lift their spirits after such devastation and seeing the smiles it put on the faces of older children who lit up seeing the shoes provided by Foot Locker and the younger kids who gravitated toward the bright CCILU shoes brings so much joy to us at Soles4Souls.

And we haven’t done this alone. Along the way, we’ve been joined by many volunteers, including Coty Sensabaugh from the Pittsburgh Steelers and his wife Dominique.

“The small act of washing feet, distributing super cool shoes is small in relation to the love and vulnerability they share with us,” says Dominique.

Vulnerability about the uncertainty of recovery. Love for being remembered. “Thank you for not forgetting us” is a phrase we’ve heard a lot on these trips.

We will not forget. That’s a promise.