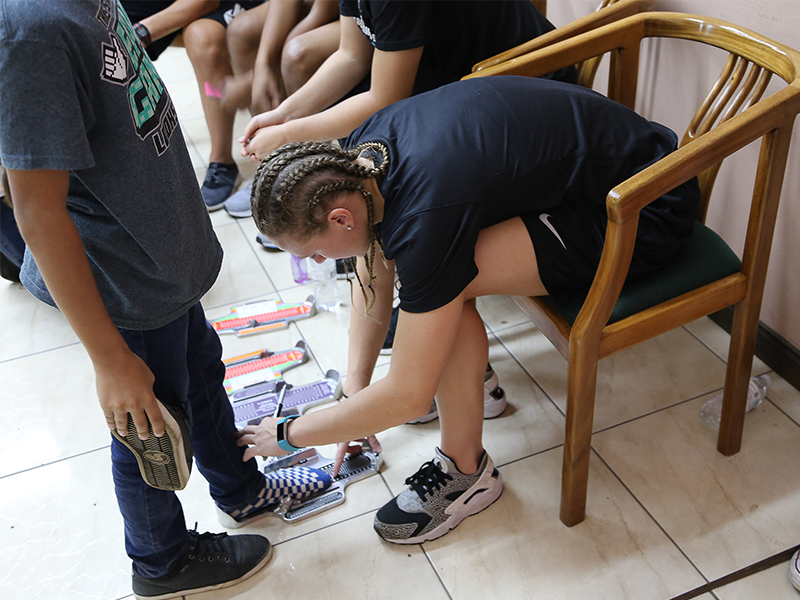 There’s no I in team. This well-known phrase reminds us to come together as a team to accomplish a goal.

Our goal of breaking the cycle of poverty is universal and without borders. In the United States, one in eight Americans live in poverty. Meanwhile, 767 million people worldwide survive on less than $1.90/day.

Through the gift of shoes, we’re making real progress toward our goal. Shoes keep children healthy and in school, two crucial tools in the fight against poverty. And we’re doing so together as part of a vast team including retailers and manufacturers that donate high quality, new product; donors providing financial support to process and ship it to where it’s needed; and volunteers who travel with us to distribute it.

Sometimes, these volunteers are sports teams joining us for an experience of a lifetime. Their spirit and cohesion on the court always extends to the field, resulting in some of our most successful shoe distributions. And our summer visit to an elementary school in Costa Rica with Vanderbilt University’s Women’s Basketball Team was no exception.

The school, located outside the capital city, serves a thousand students from different neighborhoods, some better off than others. The Principal had carefully identified those with the greatest need and arranged for them to be present. Shoes are a requirement for school attendance in the country, so making sure the kids whose education could be at risk receive a brand new pair of shoes was not just important to him. It was urgent.

Our travel coordinator and local partner set up in the teacher’s conference room, and promptly greeted the volunteer student athletes upon their arrival that morning. And it didn’t take long to see the “no I in team” concept come to life.

They were efficient, assertive and kind as they broke up into stations: the sizers who measured the children’s feet, the runners who found just the right size and pair, and the fitters who washed the little feet and delivered the gift of shoes. In less than three hours, the team had sized, washed and provided new shoes to 407 children!

“It’s very heartbreaking to see some situations that kids are in, but it’s so enlightening to see how thankful they are to just have this opportunity to get new shoes,” reflects one of the volunteers.

The team was a bit apprehensive at first not knowing if they would be able to overcome the language barrier, but as is always the case, those fears soon dissipated.

“All the kids, they always came in with a smile. I didn’t know what they were saying most of the time, but we were still able to communicate with a smile,” adds another.

And at witnessing an urgent need fulfilled, a very grateful Principal made sure to shake every single hand that morning.

Want to give back to more children in need?