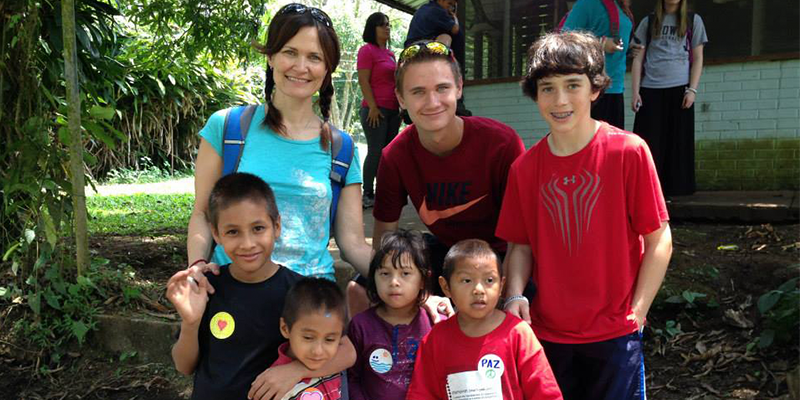 Not Your Typical Teenage Boy

Max is not a typical teenage boy. And that’s exactly what his mother hoped.

Jeni Olsen wanted her son to understand and contribute to the world. She had worked extensively with teenagers and knew how easy—and normal—it is for children to be wrapped up in their own lives. So, from an early age, she did her best to open Max’s heart and mind through local volunteer work, including collecting shoes for Soles4Souls in her Napa Valley community.

Although fulfilling and effective, Jeni soon realized it was time to go global. That’s when she decided to lead local youth on our international shoe distributions. And a trip to Honduras with Max in 2014 would be her test run.

Max was only fourteen at the time and knew nothing about the country, much less how the experience would forever change him. He was nervous for months, not knowing what to expect. Would he be able to interact with the locals? How would he deal with all the differences between them? Would he overcome his shyness? All good questions, but ones that are typically cleared up quickly after the first encounter. And so they did for Max during his first distribution, as the children promptly began using him as their personal jungle gym!

But it wouldn’t be until his visit to Los Olivos where his full circle moment would begin. At that time, Soles4Souls’ micro-enterprise program had not yet begun in this community of displaced families. Partner nonprofits had made a lot of infrastructure progress, but the men and women still had no way of generating an income.

As soon as Max arrived, a young shirtless boy ran towards him and in one swift leap, swung his unusually thin arms and legs around him. Gerson stayed beside his new friend for the entire visit, bonded by a special connection that transcended barriers of age, language, circumstance and the unfortunate glare of hunger. The two would eventually part ways and life would go back to normal. Well, a new normal.

You see, Max had grown. “I realized how privileged I am and learned to appreciate other cultures,” he says. “I couldn’t believe how kind, giving and community-oriented the Honduran people are despite facing the challenges of extreme poverty.” And he couldn’t stop telling his friends. Pretty soon, most of them wanted to participate.

Max and Jeni continued collecting used shoes in support of our micro-entrepreneurs (last year alone they rounded up 11,000 pairs!) and organizing youth group trips. Max joined them all. First Haiti, then Guatemala and then Haiti again. And then this past April, Max and Jeni decided it was time to go back to the country that started it all—Honduras. They made sure that a trip to Los Olivos was part of the itinerary.

Things in the community had changed a lot—for the better. “It was great to see the Soles4Souls micro-enterprise “hand up” model come to life,” reflects Jeni. “There was a sense of hope and opportunity around us.”

But Max had one goal—to find his old friend. He approached a group of children and pulled a picture of Gerson from his pocket. The children smiled and led him by the hand. And when Gerson saw him, he did the same thing he had done years before—run towards him with a warm embrace.

But not everything was the same. This time, Gerson looked healthy and strong, the grip of his arms a lot tighter than before. He was wearing nice clothes and shoes. The value of the hand up to his parents was evident. “That was a really special moment for me. It confirmed what I suspected: that this is where I belonged,” Max adds.

Max is now a senior in high school. He wants to live in Honduras for a while and work with our nonprofit partner there. And he wants to incorporate humanitarian work into whatever he decides to do next. And Jeni continues her work with us and has started her own nonprofit to support teens locally.

Will help us continue to provide new opportunities to those who need it most?