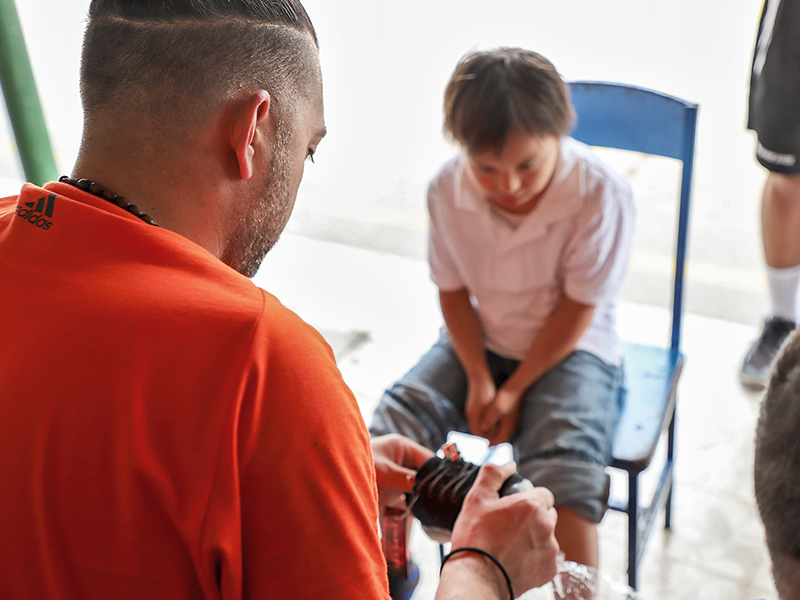 See how the Simple Gift of Shoes Gives Julio Hope

Where’s Julio? A question the teachers at the Hermano Pedro school in Antigua, Guatemala ask often. The answer is usually found in the kitchen, where this mischievous eight-year-old boy likes to hide. After sipping from the milk jug, that is.

Beneath Julio’s playful spirit lies the heart of a fighter. He has down syndrome and has worked hard over the last three years to adjust to his special needs school. He’s also nonverbal, which means he has to get creative to communicate. And then there’s the challenge that makes everything else twice as hard: he lives in one of the poorest countries in the Americas. And even the beauty of the mountains that surround his home can’t mask the harsh realities of what this means for him.

Our team met Julio during an April shoe distribution trip, one of many we take throughout the year. Retailers and manufacturers provide us high-quality, new shoes. Individuals donate money to help us get them to where they’re most needed. And volunteers join us to help distribute them on the ground. Together, we deliver the gift of shoes in 127 countries and all 50 U.S. states—over 30 million since 2006. One pair for every dollar.

The teachers set up the chairs as requested (two rows facing each other) atop the school’s roof. Interesting location, but certainly not the most unusual we’ve had. And pretty soon they were filled with excited children who kept volunteers like Jonathan Gonzalez (aka Gonzo) pretty busy. Between fittings, Gonzo would look up to find Julio watching him intently from behind a pillar. He signaled for him to come over several times without success until Julio finally built up his confidence, leapt out from safety with a smile and jumped onto the chair in front of him.

No words were necessary. The two had already crafted a history and connection that transcends casual conversation. Gonzo looked down at Julio’s shoes. They’d been boots at some point, but long wear and the elements turned them into carcasses of fabric. They looked black, but that was probably years of mud and dirt. They were damp even though it hadn’t rained that day. And the laces were too tangled to untie. So Gonzo lifted Julio’s feet toward him to wiggle them off. That’s when he realized the entire bottom sole of one of them was gone, which meant Julio was basically walking barefoot.

The shoes finally came off. Gonzo took Julio’s feet in his hands, one then another, and carefully washed away the dirt—dirt and so much more. Life in extreme poverty often means water for drinking, much less bathing, is scarce, and Julio’s feet showed his daily struggle. And the young boy’s eyes filled with gratitude and hope.

Then it was time for the main event! Gonzo took a good guess on the size and grabbed a shoe box. The sight of this alone made Julio’s head spin, so he could barely contain himself as Gonzo removed the protective tissue. “May I hold them?” he signaled. Yes, of course. And he did so with such amazement as to put striking gold to shame. Once the shoes were on, there was one more surprise. Gonzo bent down and pressed a button on the sneakers. And they lit up almost as brightly as Julio’s face. Only a series of high fives and fist pumps would do after that. And hugs. Lots of heartfelt hugs that continued until it was time to say goodbye.

You can help us continue delivering the gift of shoes to children like Julio all over the world. For every dollar you give, we can provide one more pair of new shoes to a child in need. Their lives, like Julio’s, are tough. But imagine how that can change with your help. Your gift of shoes can keep them safe, healthy and in school—a gift of hope for a better future. And that’s the greatest gift of all.