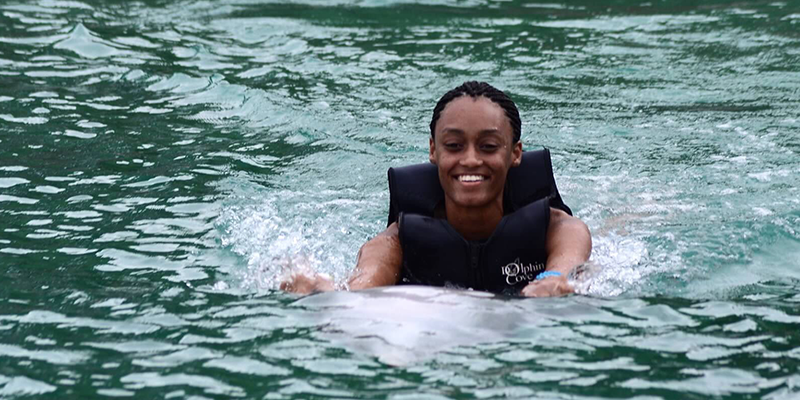 From the account of Myka Dancy, Vanderbilt’s Women’s Basketball player on her journey with Soles4Souls to Jamaica.

I had the incredible opportunity to travel to Jamaica with Soles4Souls in May of 2017. I went there thinking that I would have a lot of fun giving out new shoes to children in need, which I did. I also swam with dolphins, visited the beautiful beach in Negril, climbed a waterfall, and went cliff jumping. What I didn’t expect was for this trip to be a life-changing experience. This trip was an opportunity for me to serve many children in Jamaica while learning about myself and growing as a person.

There was one night on the trip in which everyone circled up and we shared our most memorable moments from the trip. I knew exactly the story that I wanted to share, but I wasn’t really sure if I should share it. For starters, I am an introvert, so saying anything in front of a large group is difficult enough. At this moment, I wasn’t sure if I was ready to be vulnerable in front of these people that I had only known for a week. My motto for the trip was, “I’m in Jamaica. It can’t be that bad.” I said this once I found out that the forecast predicted rain for the entire week. I said this after I had gotten sick and lost my voice on the third day of the trip. I said this when my skin broke out with tiny burning blisters on my stomach and back and I could barely bend over. So, as I sat there waiting for my turn to speak up, I said this once more and went for it. Here’s what I shared.

On one of the days, we visited a small elementary school that seemed like it was placed in the middle of nowhere. We were there for a long time that day. We fitted all of the children with shoes, played with them, danced with them, painted their school, and ate lunch there. There was one girl there that I remembered the most, Jasmine. The reason why I remembered her was because she stuck with me for a while when we were there. She was a ball of energy the entire time. She didn’t have a shy bone in her body. She was just a joy to be around that entire day.

At one point, we were all painting the school and I took a quick water break. As I was sitting, she came over with her tablet and asked me to take a picture. I thought that she wanted me to take it for her, but I was surprised to learn that she wanted to take the picture of me. After she took the picture, she grabbed my hand and asked me to help her take more pictures of everyone. So, we both went around the entire school making sure that she took a picture of every volunteer there. She was adamant about taking pictures of us and not with us, but I did convince her to jump in a few of the pictures. She also didn’t want any of her classmates in the pictures. I finally asked her at one point why she wanted pictures of us and not necessarily with us. She said that it was because she wanted to remember that day forever because nothing like that had ever happened to her. She said that it was the best day of her life and that she wanted to show everyone when she got home.

This seemingly small encounter was monumental to me. First, I had personally been struggling connecting with the kids thus far. This was day three and I felt that my own shyness and personality was keeping the kids away from me. Don’t get me wrong, the kids were awesome. They were very approachable and full of life, but I found myself on the outside of a lot of the play circles. Honestly, simply put, I felt that these black Jamaican kids were more interested in the white people that I was with because they looked different. They loved to play in their hair and they jumped to take pictures with them. I looked just like them. I have brown skin and my hair was braided similar to what they have seen many times before. I don’t blame them either. If a different looking person came around me, I would be intrigued too.

This encounter with this one girl opened my eyes in that she showed me that they were just as excited to see me as I was to see them. It’s an instant connection that I can’t even really put into words, but there was a sense that she felt comfortable even though I was a complete stranger. Just being around people that look like you can be comforting in this idea that you know that there is someone that sort of speaks your language. This changed my outlook for the rest of the trip, and I found it easier to engage with the kids at the schools.

Secondly, I gained some perspective into a community that is much more different than my own. I remember one of the teachers saying that students would miss school when it rained because they didn’t want to mess up their only pair of shoes. This was heartbreaking to hear, because I have never had to experience that, but it also just shows you why certain inequalities exist. You may wonder why people get behind in their education or why people maintain lifestyles below the poverty line. Then, you look back at their childhood and it could’ve all been because of a pair of shoes. Jasmine said that she was taking the pictures to remember that moment for the rest of her life because nothing like that had ever happened to her. The best day of her life was when she got one new pair of shoes. While that was an incredible day, that is hard to hear. It made me wonder why some people had to live this way when other people live luxurious lives. I just have to remember that God gives the toughest battles to the strongest people, and the people that I saw in Jamaica were some of the strongest people that I had ever seen.

This trip with Soles4Souls changed my life for the better. I went there thinking that I was going to change the lives of the children that we were serving, but in the end, I gained so much out of it that I was not expecting. I could go on for days about other memorable encounters that I had in Jamaica. This trip solidified in my mind that I was put on this Earth to serve others, to serve those in great need, and most importantly serve God. I will never see how much the shoes we gave away actually impacted the lives of these kids, but I do know that for at least a few hours in their lives they had fun. They didn’t have to worry about their struggles during that time. They got to meet some smiling new faces. Last, but not least, they took home a new pair of shoes.